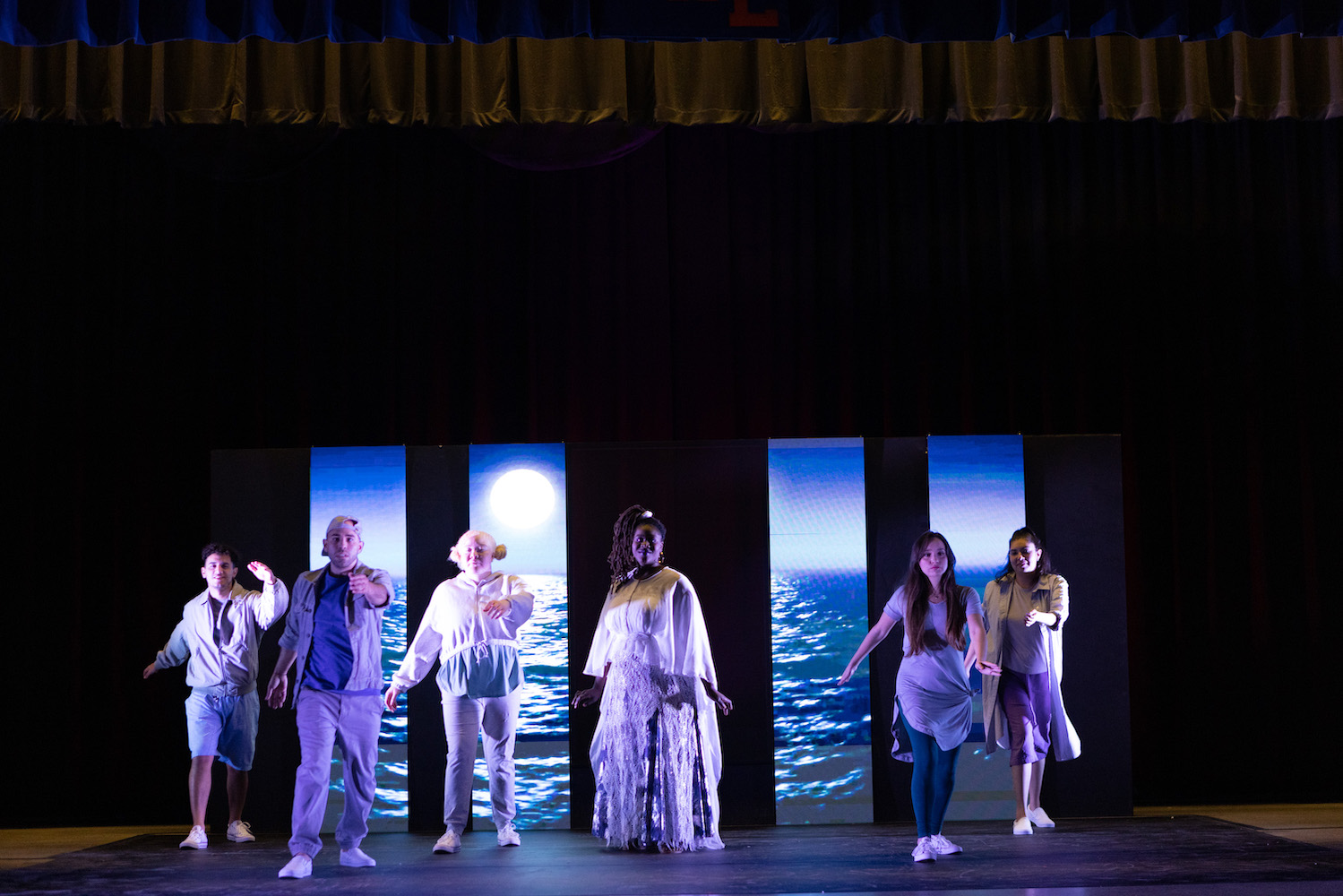 One of the Arsht Center’s many initiatives in bringing art to its audiences is collaborating with Miami-Dade County Public Schools. Workshops, surveys, and discussions are constantly had with teachers, administration and students to determine needs or gaps in student education, to find what might be missing and to facilitate solutions.

Ten years ago, “Learning Through the Arts” was initiated by Jairo Ontiveros, VP of education and community engagement at the Arsht Center, as a commitment to the school system that students would have free performing arts experiences produced by the Arsht Center.

In phase one, the Center produced “Rock Odyssey” (2010) for fifth graders. Based on Homer’s The Odyssey, this was an arts integration experience exploring creative writing, language arts, and geography. Seventh graders experienced phase two with “Kitty Hawk” (2017) which was the story of the Wright brothers and integrated A for Arts into S.T.E.M. The Center coordinated with Boeing and Airbus to introduce Miami students to future career possibilities.

Now, with phase three, “I Am Me” is being presented to ninth graders in their schools addressing a myriad of issues that contribute to students’ mental health and wellness. The show has been in the works for over three years.

Lakeisha Firth, Arsht Director of Education, has been a part of the process from the beginning.

“Initially, we had a team of ninth grade students, about one-hundred from each district in Miami, come to the Center and we workshopped different ideas with them throughout the day. What resonated with us, and what came through from the teenagers, were their Miami stories. They wanted to see themselves reflected on the stage.”

Ontiveros says, through really ‘listening’ to what the students were saying, it was determined what the focus needed to be.

Award winning Miami-based actor, director and writer Teo Castellanos was engaged to envision, oversee and to direct the project. To create the script, he assembled a team of five diverse Miami-based writers who were not far in age from the very students they were writing about. The diversity and multiple writers gave a more encompassing perspective to the numerous issues that were being addressed.

“There was a mix of representation,” Castellanos says. “It was also an opportunity for Miami based artists. Five writers instead of one.”

As the pandemic unfolded, the writing continued on zoom before being put on hold as everything was shut down. When the writers reconvened after almost a year, some of whose life had now changed, Rudi Goblen, was brought on board to help edit, rework and augment the script. Goblen is a Castellanos company member currently at Yale University in the playwright program.

“I Am Me” is a Miami production through and through.

“It was important to me that the piece was mature,” Castellanos says. “ I think young people have a maturity and sophistication, and they should be treated that way.”

The issues are not simple. LGBTQ concerns, immigration, identity resilience, support, family pressures, belonging, and assimilating are universal themes that are addressed in the play. Adding isolation and loneliness because of the past years’ quarantine makes “I Am Me” an even more powerful and vital experience for today’s youth.

Ontiveras says, ”Mental health or mental wellness of young people is a vast subject. I wanted to create intimacy, to really spotlight that this was presented in their second home, that students were in a safe, comfortable space, on their own turf with their friends, their teachers and not at the Arsht.”

The encompassing show must be able to move into the multiple schools, some of which have a fully fledged proscenium theater, as well as others that have a smaller cafetorium. Castellanos has much experience creating touring productions and was familiar with needs to make the show adaptable to accommodate multiple spaces. The LED screens can be shrunken or expanded, the marley floor can be made smaller or larger and the actors have numerous choreographic designs that conform to various spaces. The sound and lighting is consistent so that every school receives the same theatrical experience.

It has been a huge and complex undertaking to coordinate with each of the 50 high schools amidst the testing, extra curricular activities, and professional development days off for teachers. “I Am Me” has been the largest educational outreach endeavor that the Arsht Center has undertaken.

Ontiveras says, “ This has very much been a collaboration between the school system, the activities coordinators, the assistant principals and principals and our team. They have all been awesome partners.”

Starting with only 20 schools, the project became larger than life as teachers started talking to other teachers and words about “I Am Me” started spreading like wild fire. The production resonates with faculty and students alike. Phrases stand out and have an impact.

One teacher remarked how intimately her students were affected by the line, “As the parent, talk to me. I’m your Mother.”

Another student related to “Water Me.” His mother is a gardener and nourishes her plants daily.

Ontiveras says, “We ultimately focused on three things. We wanted to listen to the students’ needs, we wanted to normalize the conversation, and we wanted to plant the seed and spark the fire in them that the arts can be a coping mechanism, and can be an outlet for them for self expression. We know that art needs to be part of the conversation of healing, recovering and restoring.”

To continue the conversation after “I Am Me” is presented, art therapists and teaching artists have created follow up resource guides to serve as a tool for processing and discussion. Activities and workshops will also be held both virtually and live throughout the next nine weeks.

The performances of “I Am Me” started in January will continue with performances Monday – Friday through early April, 2022.

Shared with permission from Artburst Miami.