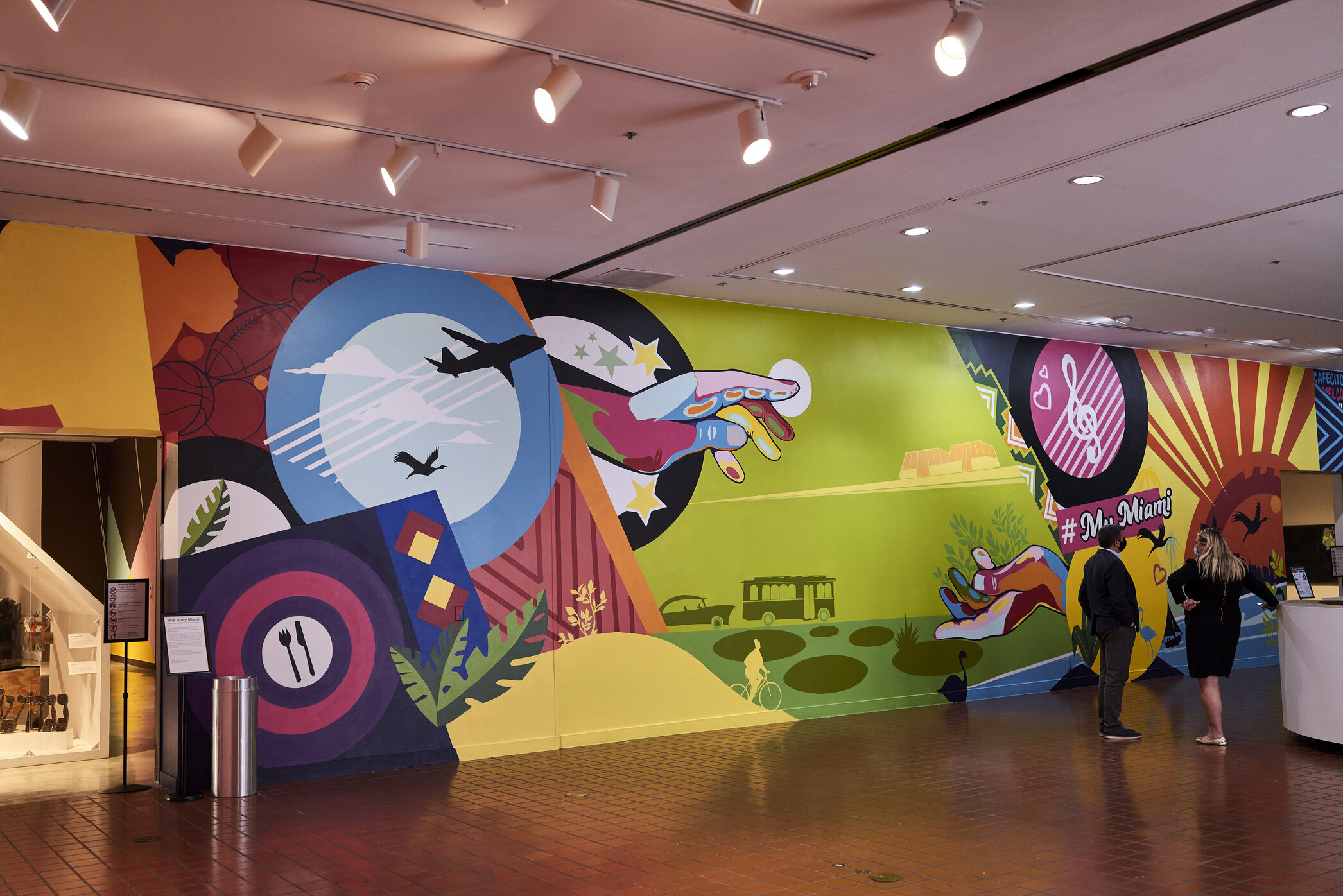 “What Makes Miami, Miami?” mural at HistoryMiami, created by a trio of artists known as Wall’n Collective and curated by Rosie Gordon-Wallace, founder of Disaporta Vibe Cultural Arts Incubator.
Photo by Roy Wallace

Tapping Rosie Gordon-Wallace to curate the mural now gracing HistoryMiami’s lobby was genius. Not only did it debut during Caribbean American Heritage Month, but it asks the question “What Makes Miami, Miami?”

“Michael Knoll called and asked if I’d be willing to curate and produce this mural that asks the question ‘What Makes Miami, Miami?’,” Gordon-Wallace said. “I thought what an interesting way to collaborate with this museum and still they have to be engaging the public in current contemporary ways.”

Knoll sums up his decision saying, “we’ve been honored to partner with Rosie Gordon-Wallace and Diaspora Vibe Cultural Arts Incubator on different projects over many years. Rosie is a respected arts leader with a history of undertaking meaningful projects for our community. She is also a wonderful collaborator and working with her on this new initiative was an exciting possibility for us. We feel fortunate to have joined forces with her on this effort.”

She was tasked with selecting an artist, so she put forth a team of artists a trio who for this project called themselves Wall’n. They submitted the proposal to the HistoryMiami curators and the sketches were approved at the beginning of May. That was part was easy, more challenging was the time frame for completion of the project.

“After approval we had a month in which to execute this mural and all three artists have full-time jobs. It was a short period of time to select the artists and so I chose wisely ones that I knew could execute it in the allotted period of time,” she said.

Those artists were Trinidadian artist Izia Lindsay, Haitian artist Asser Saint-Val and Cuban artist Rosa Naday Garmendia. Coming together under Rosie’s leadership, who served as collaborating curator “we were elated they formed this collective in response to the opportunity,” said Knoll.

The group then came together to figure where they would put a mural that would envelop the entire History Miami lobby wall which is 130 feet long and over 20 feet high.

“The mural also had to answer the question so we decided to do the entire wall and the side walls to envelop the space so it would be cohesive and strong,” Gordon-Wallace said.

The four met and spoke about the different touchpoints of Miami as individuals from different areas of the Caribbean. Their conversation centered around language, food, the people, neighborhoods, ritual and respect to the indigenous communities here before them and also transportation was important.

“We had little nods to things that are important to people’s quality of life. This was our process, talking through the different memories in Miami. A nod, too, to English, Spanish and Haitian Creole and making sure we had a strong color palette,” she said.

Ultimately, they wanted it to be invigorating and offer a message of resilience, hope and joy. To them, all these factors would make a successful mural.

It was after those conversations they decided on the color palette and getting the materials to embrace all the things they wanted to include both subtle and not subtle ways. The goal was to make sure that people could find themselves in the mural.

Knoll was impressed at how the collective then worked tirelessly at the museum to create the work before an unveiling to an appreciative public.

“At the opening people were going up to the mural and pointing at specific areas that resonated with them,” said Gordon-Wallace.

This mural is just the first in what HistoryMiami plans to be a new ongoing mural initiative at the museum, one that continues to explore the question posed.

“Over time, we hope to partner with various local partners and artists to feature their answers to that question. Highlighting different perspectives is a core value of ours for this project, and for all of the work we do at the museum,” said Knoll.

Creating the colorful mural which features flamingos, a trolley, a biker, a basketball, football and baseball representing all of Miami’s sports teams, an airplane, a bright sun with orange rays jutting out, a plate with cutlery to depict Miami’s vibrant and multicultural culinary scene and of course, a section with the hashtag #MyMiami for the ever-important selfie, was a thrill for the participating artists.

Which, according to Rosie, “is so skillfully done you can actually step into the water. I wanted people to feel a sense of joy and you an assert that feeling with color, images, signs and motifs.”

Rosa Naday Garmendia said she “was incredibly pleased when DVCAI asked me to be part of this project, I have lived in Miami for several decades and the theme What Makes Miami, Miami was very appealing to me.”

She also feels murals are an important form of creative expression that have the power to be transformational and can serve as a vehicle to educate, inform, and spur conversation. “As a visual activist this is a particularly important aspect of my own personal practice,” she said.

The opportunity to work collectively with Asser and Izia which Naday Gardenia has known for years was thrilling she said, “because it gave me a lot of insight on each of their personal methods and values as artists.”

Fellow artist Asser Saint-Val, a fixture in Miami’s visual arts community echoed her sentiments saying, “I was honored to be chosen by Rosie to be on the mural team at HistoryMiami. Rosie is very well known in the community and she knows hundreds of artists. She could have chosen many. But she selected me. I’m grateful. It was fun and lots of work. I enjoyed it.”

Gordon-Wallace says whenever they need her again, she’s ready to do another one because it was such a rewarding and transformative project.

“As the mural revealed itself with color it transformed the space with beauty and joy. I’m really proud of what we were able to deliver. Also, HistoryMiami’s entire curatorial and proprietor staff facilitated the completion of the mural,” she said.

Knoll hopes museum visitors find it thought provoking, and he hopes they are inspired to reflect on not only the artists’ work, but also their answer to the question “What Makes Miami, Miami?”

Looking to the mural the answer is: a vibrant, multicultural, multi-layered community of interconnected individuals that make Miami shine.

WHAT: “What Makes Miami, Miami?” mural