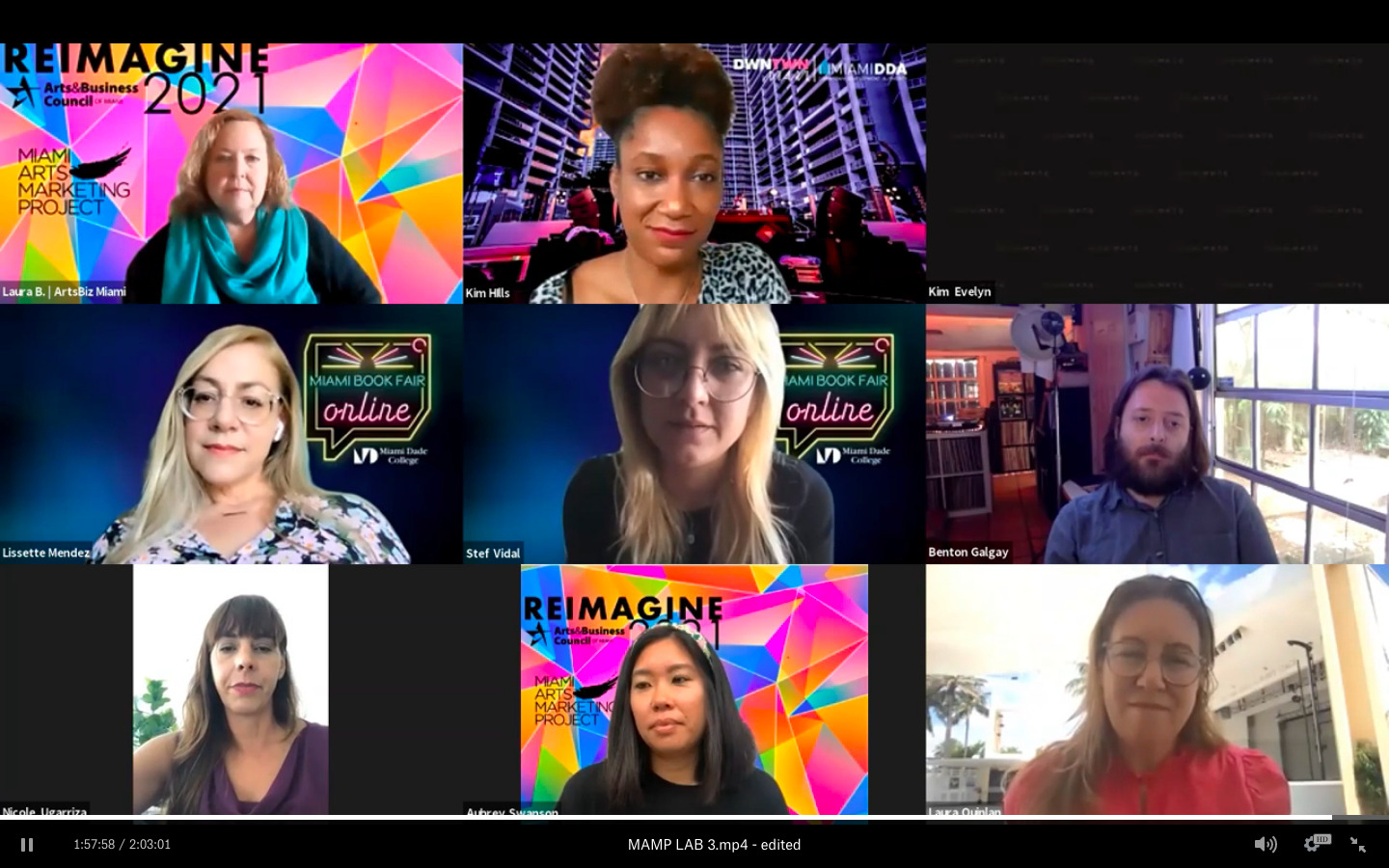 The most recent one, held virtually in late March and titled “Impactful Virtual Arts Events,” and led by Aubrey Swanson, founder of Auboom Media a social media consulting, brand management and training business.

Lending their expertise on virtual events were six arts industry leaders as well as a representative from workshop sponsor WOW Marketing, a full-service marketing agency.

They discussed how to design the best virtual events, monetize and sell tickets and promote those events. The rise of Streaming, Zoom and Facebook Live and the new opportunities that digital media and virtual entertainment create to broaden audiences for the cultural sector, were at the center of the conversation.

“The goal of the workshop was to give tangible, real life examples of how to host successful virtual events,” said Ms. Swanson.

Kim Evelyn, associate design director at WOW Marketing mentioned using event architecture to produce her events in the last decade. Producing a drive-in event as well as a pet event meant needing to pivot and discovering “a spark in creativity we never knew we had,” said Evelyn.

Pivoting is most certainly the buzz word around 2020, something almost all cultural groups had to learn during the dreaded pandemic year. The Miami Book Fair was one of those groups.

Lissette Mendez, director of Programs and Estefania Vidal, marketing manager for the Book Fair joined forces at the workshop to dive into how they produced both the November Book Fair as well as year-round virtual events. (Read more about this in our October blog post).

As soon as all was called off in mid-March of 2020, Mendez began researching possible virtual platforms by seeing what others around the country were doing. She quickly understood that “people were looking for us to continue our programming so our first virtual one was Poet Laureate Richard Blanco on April 1 and we had really good engagement,” she said.

They quickly went to work, converting the remainder of the season to online. That entailed extensive research and creating a platform that would be accessible to all ages. Ultimately, 90% of their conversations were pre-recorded and available On Demand while the live ones were scheduled as per usual.

Vidal from the Book Fair chimed in explaining how they created a WordPress site and used Streamyard for their recordings and live feed. Although they used programs to communicate directly with users on site navigation, Mendez feels they were a bit lacking in that area.

“We are currently in the process of planning how we will present the 2021 Book Fair, whether in person or online. The idea behind MBF online is a work in progress,” said Mendez. Although they would love to host a block party, they may create a hybrid Book Fair going forward because “we reached a much larger, worldwide audience, something we want to repeat” she said.

Laura Quinlan and Benton Galgay, chief financial officer/program manager and deputy director (respectively) of The Rhythm Foundation, have been hosting events at the North Beach Bandshell an outdoor venue for years now but that still proved challenging.

Quinlan said their switch to virtual came as part of a continuum that dates back to when they hosted the outdoor event Big Night in Little Haiti. That is when they began building their technical team and still the “birth of Facebook Live as a platform was an eye opener for me,” said Quinlan. “It allowed us to share our work with a global audience. We realized that the Caribbean world was extremely comfortable with these streaming platforms.”

Then in the summer of 2019 when the Buskerfest team, who were producing live events throughout the city, showed up with a great streaming service, it was their final entry point. By January 2020, The Rhythm Foundation was livestreaming their shows so a close friend of theirs Luis in Peru who was battling cancer, “could see the performances,” she said.

The livestream audience grew on March 14 when the organization began livestreaming their shows at the Bandshell. Some they offered for free and others were paid events.

Both Quinlan and Galgay expressed their gratitude for the support they have received from the Miami-Dade Department of Cultural Affairs, City of Miami Beach and the Knight and Miami Foundations, among others. “That support has allowed us to pay the artists, venue and tech crews,” said Galgay.

Although they have suffered some staff turnover, Galgay has become quite the tech expert and built the infrastructure to keep them going. Through their internal team have learned about overlays, digital graphics and integrations.

Capturing data from attendees has been more of a challenge but through it all they continue to promote their programming through their website. However, they continue exploring several outlets,

At the South Miami-Dade Cultural Arts Center, Nicolle Ugarriza, marketing and communications manager had a similar situation when the pandemic struck with the venue shut down in March and April and all shows canceled.

“We were concerned how that was having an effect on local artists and also how we would keep in touch with our patrons,” said Ugarriza.

Lacking a tech savvy marketing staff and that it’s only two people, they decided like Alvin Ailey Dance Company and other groups “to let the artists film themselves at home. The videos were two to five minutes long. We launched it on Facebook Live with a chat function so the community could comment,” she said.

Those live performances were then posted to SMDCAC’s website where people could view them and also make monetary contributions via Cash App or Venmo. They presented the shows on Thursdays, doing rudimentary marketing through e-blasts to patrons and on social media.

“We received a great response and were covered in The Miami Herald Weekend section cover. We presented virtual for four months and were immensely proud to employ artists. One of our artists received a $1,000 donation from one person,” she said.

It began with world-renowned DJ David Guetta whose performances raised $700,000 for Feeding America. That led to them creating their “Downtown Vibes” event with a livestream performance every Friday night for several months during the pandemic.

“During the livestreamed DJ events we had a live tip jar, similar to what SMDCAC had for their livestream shows. It allowed us to help the artists during a difficult time,” said Hills.

The family-friendly weekly shows were marketed through social media, advertisements in Miami New Times and partnerships with Miami Book Fair and Miami Center for Architecture and Design.

“This was very prosperous for us as well as for our partners. Anything they wanted to do that was great for our audiences, we wanted to do. Our bilingual activations happened through the Book Fair. We did Facebook and Instagram Live as well as Crowdcast for the livestreams,” she said.

The DDA being an economic development agency “we know we have a community to take care of and this was our way to show love for everyone,” she said.

The next virtual MAMP Lab 4 “Energize Media, Messaging and Outreach” is set for April 27. Click here to register.